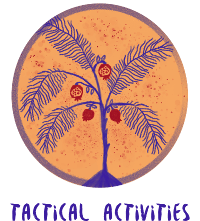 This game is designed to have quick, strategic responses to very difficult and often triggering situations. It was purposefully designed in timed, competitive rounds and to be carried out in a light, swift way to encourage debate and discussion with a degree of distance. A gaming Scenario generates adrenalin and expectation around escalations, both a part of the online GBV experience. An atmosphere of game competition is one way to bring in these elements when strategising.

However, it is important to note that some groups are not comfortable with competition or able to assert that one Survivor Team strategy was better than the other presented, so using tokens as points and declaring a “winner” in your game is entirely optional. The Game Facilitator should decide if they want to introduce competition and tokens before beginning the role-play.

If using tokens, each member of the Public should receive four tokens (in the form of cut-up colored papers, poker chips, individually wrapped candies, stickers, etc.) at the beginning of game play. Each member of the Public will award one token per round to the Survivor Team whose strategy best fit the Survivor profile and context. At the end of three rounds the Public debates; if there is consensus, five extra points can be awarded to the Survivor who has chosen the best overall set of strategies. The total number of tokens will determine which Survivor Team “won” the scenario. The round ends when the Public provides closure to the Scenario with a plausible conclusion.

Game Facilitators must be familiar with the following game instructions and make sure teams understand their roles.

Get the game started by forming Survivor Teams A and B and the Public.

Give each Survivor Team flipchart paper, markers and the Survivor and Advisor Instructions.

While Survivor Teams do this, the Game Facilitator gives the Public their instruction cards and briefs them on their role:

The Game Facilitator or Public may choose a Scenario for the game. The available Scenarios are

Each Scenario has its own Challenge cards. Alternatively, the Game Facilitator or Public can create one based on their context.

TIP: If creating your own Scenario, keep in mind the Scenario should start at the point that the Survivor is concerned about what is happening, but not already facing a full-blown attack.

Throughout, the Game Facilitator keeps time and tries to keep a fun, light atmosphere as the scenarios and challenges explored in this game could be upsetting for participants if explored too deeply.

The Game Facilitator leads a discussion about strategies learned and how participants felt given their assigned roles.

Go back to this activity's main module (Online Gender-Based Violence)